Skip to content
Asela Sampath, head of the All Ceylon Canteen Owners’ Association (AICOA), says that the responsible people and the rulers who rule the country eat and live well, but the people who sent them to such places are living without three meals a day.
Asela Sampath stated that the Ministers and the responsible parties do not understand the pathetic situation of parents and that they are not in a position even to buy a bun for their children.
“But rulers think that it is enough for people to live by eating only one meal per day,” he said.

He explained that government employees show some ineffectiveness without nutritious food, and pointed out that like adults, their children also fall unconscious without food.

Addressing the media he also said that people will only be getting their relief for essential commodities promised by the government, after their death.

“People do not get concessions needed to get essential commodities while they are living, but they get them after their death or during their seventh day or three months of almsgiving.” said, AICOA Chief Asela Sampath. 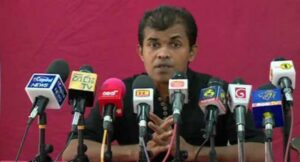 Head of the AICOA Asela Sampath requested the President and opposition leader to dissolve the government as soon as possible and appoint democratically elected leaders to provide relief to the people, pointing out that this country has reached such a miserable state due to the promises of politicians.
Share This :