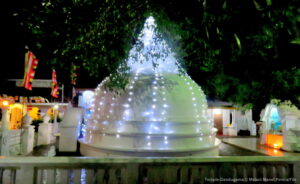 upcoming Vap Full Moon Poya Day, in protest of the 555% increase in electricity tariffs on places of worship, including Buddhist temples in Sri Lanka.

Poya Day is a spiritually very important day for all the Buddhists in Sri Lanka as they go to Temples and Vihara to worship Lord Buddha.

The Central Provincial Sangha Sabha (Monks Council) of the Sri Lanka Ramanna Sect met on Sunday, 18 September to discuss the Government’s decision to increase the electricity tariffs on religious places including Buddhist temples by 555%.

The monks who participated in the discussion have expressed their strong opposition to the government’s decision, claiming that many of our temples cannot afford the increased electricity charges by the government.

After the discussion, speaking to the media, the monks said how the lights in the temples can be switched off when the lay folk come and perform rituals such as Bodhi Pooja (a Buddhist ritual).

They charged that the electricity tariff hike could be a conspiracy to keep temples in the dark during the upcoming katina (Buddhist ritual) season and Vesak and Poson seasons.

The Buddhist monks also said that they would request the temples across the country to turn off all the lights and leave the temples in darkness on the upcoming Poya Day to protest against the Government’s decision to increase the electricity tariff and the views expressed by Minister of Power and Energy Kanchana Wijesekera in that regard.

Some views got from speaking with several Buddhist Monks, they said that due to the economic crisis in the country, the income received by religious places including Buddhist temples has decreased at present. They mentioned that the temples located in rural areas are specially rendered helpless due to the increase in electricity tariffs, 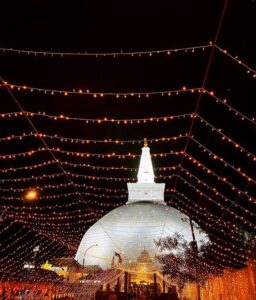 and said that the Government should take steps to reduce the electricity tariffs as much as possible.

Ven. Omalpe Sobitha Thero, for example, in Ambilipitiya Sri Bodhiraja Temple, which houses about 75 monks who are still studying, the electricity fee has increased from 60,000 to 300,750 rupees. So this is not a punishment? asked.

Further speaking, “We cannot agree with this decision of the government. There is no way we can afford this huge payment.” Ven Omalpe Sobitha Thero emphasized.